Centriole and basal body are two different terms describing the same structure; a cylinder composed of nine triplet microtubules. When found in the core of a centrosome this cylindrical array of microtubules is called centriole, when found at the base of cilia or flagella it is called basal body. First seen over a century ago, the centriole/basal body is still one of the most enigmatic structures in the cell. The function of centrioles and the mechanism of their duplication remain unclear. Basal bodies are known to be essential for the assembly of cilia and flagella. They template the organization of the nine doublet microtubules of the cilia and flagella and dock proteins involved in intraflagellar transport (IFT), which is needed for flagellar assembly. Cilia and flagella emanate from the surface of many eukaryotic cells and have diverse roles in motility and sensory perception. Cilia and flagella are highly dynamic microtubule based organelles, which assemble and continuously turn over at the flagellar tip. The assembly and maintenance of cilia/flagella depend on a process called intraflagellar transport. Intraflagellar transport was first observed in Chlamydomonas flagella as a bidirectional movement of large protein complexes (arrays of IFT particles) underneath the flagellar membrane, which were seen to travel from the base to the tip of the flagellum and back from the tip to the base. Subsequent work demonstrated that IFT operates in virtually all eukaryotic cells that display cilia or flagella. Consequently, mutations in genes encoding polypeptides of the IFT machinery result in a number of severe cilia-related diseases, including respiratory disease, polycystic kidney disease, retinal degenerative disease, infertility, and defective left-right-axis determination.

To study basal bodies and flagella we use the biflagellate green algae Chlamydomonas reinhardtii and Spermatozopsis similis. These algae are excellent model organisms since their flagella and basal bodies can be easily isolated (Geimer et al., 1997). The genome of Chlamydomonas reinhardtii is completely sequenced, methods for genetic engineering are established and cytoskeletal proteins can be visualized in living cells using the green fluorescent protein (Ruiz-Binder et al., 2002). 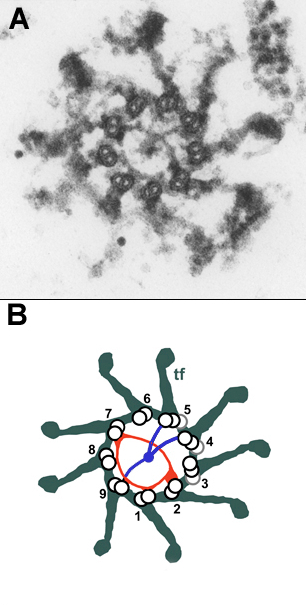 Using transmission electron microscopy we analysed serial sections of isolated basal bodies and generated a high resolution map of the Chlamydomonas basal body which led to the discovery of a novel, previously unnoticed structure, the "acorn" (Geimer & Melkonian, 2004). This filamentous structure is attached to the inner wall of the basal body at its distal end and is present in both the mature basal body and the nascent probasal body. By analyzing isolated basal bodies by serial section postembedding immunoelectron microscopy we demonstrated that centrin (a ubiqitous centrosomal protein) containing structures of the basal bodies are part of a continuous filamentous scaffold that extends from the nucleus to the flagellar bases. In addition, centrin is located in the distal lumen of the mature basal body and also in the nascent probasal body in a rotational asymmetric structure (Geimer & Melkonian, 2005). The "acorn" and centrin fibers impose inherent rotational asymmetry on the basal body and might thus provide the basis for asymmetric attachment of additional structures during basal body maturation. As such they might ultimately define the direction of flagellar beating and underpin cellular asymmetry in general. Based on our detailed characterization of the basal body ultrastructure we are currently localizing additional basal body proteins by the use of immunoelectron microscopy and the analysis of RNAi cells and mutants affecting the basal body. 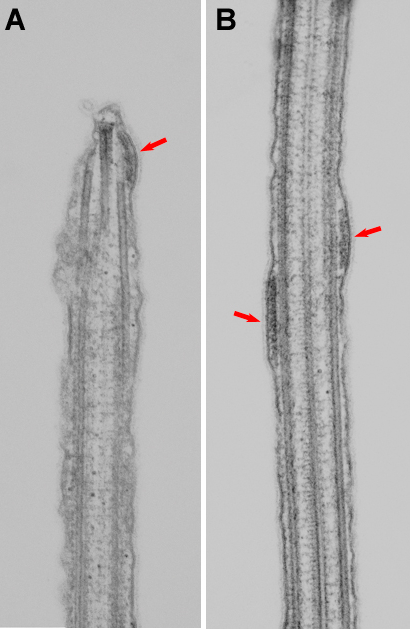 Despite its physiological importance many aspects of the intraflagellar transport remain poorly understood. Most of the components of the IFT system have been identified and characterized, but the molecular mechanisms by which these different components of the IFT system interact and are regulated are unknown. Our current focus in studying IFT is the flagellar base and tip, as it is at these places that motor regulation and cargo loading/unloading has to occur. We previously showed that the small MT plus end-tracking protein EB1 localizes to the flagellar tip and basal bodies in Chlamydomonas (Pedersen et al., 2003) and interacts with IFT protein 172 (Pedersen et al., 2005). We are currently attempting to identify additional binding partners of EB1 in the flagellum, and study the function of EB1 in the flagellum using RNA interference technology. Using immunogold electron microscopy we showed - for the first time - that the groups of particles located between the flagellar membrane and the outer-doublet microtubules correspond to the groups of IFT particles that can be isolated biochemically. Using biochemical and ultrastructural approaches we proposed a model for IFT tip turn-around (Pedersen et al., 2006). To test this model and investigate how each of the three steps is regulated we are currently using genetic, biochemical and electron microscopical ​

Geimer S., Lechtreck K.-F. & Melkonian M. (1998b) A novel basal apparatus protein of 90 kD (BAp90) from the flagellate green alga Spermatozopsis similis is a component of the proximal plates and identifies the d (dexter)-surface of the basal body. Protist 149:173-184